Blast From the Past: Sean Burroughs 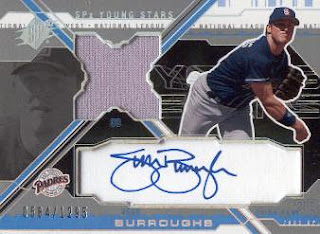 I did a little research to discover that Burroughs moved to Vegas with his girlfriend after baseball and spent his time in the Casinos and on the golf course. The constant talk of not hitting for power got to Burroughs head and in his last few years he tried to swing the bat harder hoping it would produce more power. It didn't and it just led to more strikeouts and low batting average. Much less then he was capable of.

Through support of friends and family Burroughs is now back in the major leagues after being called up by Arizona. He was signed after a November workout when scouts mentioned how he looked like the Burroughs of 10 years ago. The guy who hit singles and doubles to the tune of a .300+ batting average.
Posted by Baseballislife1984 at 7:34 AM No comments:

It's been a while since I posted thanks to some computer issues. Thankfully I'm back with a new computer.

When the warm weather starts coming I start thinking about summer and it takes me back to the days when I was young. There were no crappy summer jobs, no responsibility at all in fact, actually I stand corrected as I was expected to cut the grass once a week. This bumped up my weekly allowance from $5 to $10.

I spent my summers playing NES, street hockey, baseball, bike riding and collecting. The first summer I really started collecting was 1996. I had been collecting for a few years, although I was lucky to score a half dozen packs a month.

In the summer of 1996 things began to change, my family got really big into flea markets and we would go at least two times a month. Secondly, my Mom and Grandma dragged me to the mall at least three times a week to look at clothing and I was usually awarded with a few packs for not complaining.

My Mom and Grandma were also good friends with a lady who ran a convenience store in the mall, who's husband was actually a collector himself and sold singles and packs. While my packs were usually bought at the dollar store, I was lucky to get a high end pack every once in a while from the convenience store. Usually Zenith or BAP. I also collected Cujo back then and would pick up singles from the store, which always sold for 100% book value!

The hobby was hot in the mid to early 90's and all the kids in my area collected, even the computer nerds who knew very little about hockey. When the summer got too hot we would always retreat to someones air conditioned basement and trade.

In 1996 companys really started to put effort into inserts and foil cards were really popular. Serial numbered cards were starting to pop up and you thought you had something really rare when you pulled a card numbered to 5000. I really miss those days.

It's nice to see that Painini is making an effort to bring back 90's staple products such as Pinnacle and Zenith. More effort is going into non autographed and non jersey inserts and I see more collectors going after regular inserts again. Certified as really made an attempt to bring back the  parallel card and with most collectors it's really hit or miss. You love the parallels or you don't.

I will always associate 90's cards with my care free summer, childhood day's. Family camping trips were a great opportunity to memorize beckett prices, flea market's offered a wide variety of product and card shows seemed to pop up everywhere. It would be nice to see card collecting going back to a hobby instead of a business. I think everyone would have a lot more fun that way and collecting would become more popular with youth again.
Posted by Baseballislife1984 at 7:42 PM No comments: