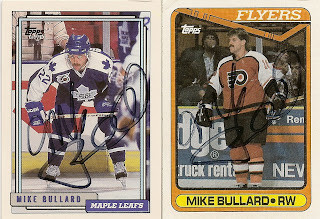 Not the greatest autograph to start off with but I'm still happy with it. I collect the 90-91 topps set signed and this is a great add to my collection. Bullard had some great offensive season's in the 80's but dried up once he moved to the Leafs. I never fully understood how some players can dry up so quick. In the 87-88 season with the flames Bullard posted 103 points. Only five seasons later in could manage only 28 points. You can usually blame the obvious such as injuries, loss of playing time to young prospects etc. But in Bullard's case I'm not really sure. If anyone knows please let me know!!

I sent this out in early June so turn around time was about 7 month's!
Posted by Baseballislife1984 at 8:42 AM No comments: 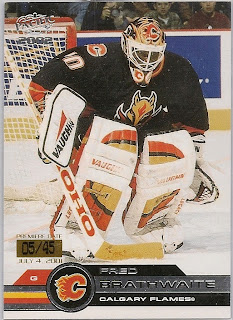 So far two mail days and both are Fred Brathwaite! My main PC players aside from Brathwaite are Kirk McLean and Terry Sawchuk. I do have a handful of other players I collect as well and 90's inserts sets too. Ultimately my goal is to own every Vintage Sawchuk card, every Kirk McLean card and every Fred Brathwaite card.

I was happy to pick this short printed card up for pretty cheap. Although the buyer shipped in a top loader with tape at the top, which is very frustrating. I don't understand why most buyer's don't ship in a team bag. It saves the top loader and if you buy in bulk your cost price per team bag is 1 cent to 2.5 cents per bag. I now have another top loader I must get rid of because the top is ruined from tape! Use team bag's people!
Posted by Baseballislife1984 at 8:34 AM No comments: 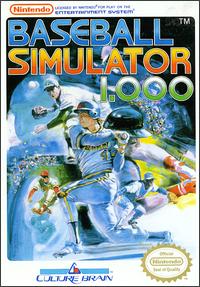 I have NO clue at all how this gem came to be in my NES collection and for the last 5 or six years I have tried to figure it out. Regardless, this is my favourite baseball game for NES. The game was released in 1989 shortly after Baseball Stars, so this game gets looked over often. The best part about the game is that you can create a season and it will save stats.

The game features two types of teams: regular teams and ultra teams. The ultra teams feature special abilities and can be very tough to play against. The pitchers have special pitches that can't be hit and often you will see three of them in a row with the bases loaded and two out.

The one big knock against the game is that you must SIM computer controlled teams and this can take 5 or ten minutes. You usually have to Sim two games in a row. This has prevented many from completing a season and fully experiencing the game. I really don't mind to be honest, during SIM games I'll go to the washroom or read a magazine, sometimes both together. If it's a really good match up I'll even watch the SIM mode.

Since this is my first review I'll explain how I'll rank. For any game I play the most important factors are overall game play and fun. I'll rank each category out of five and score the game out of ten. 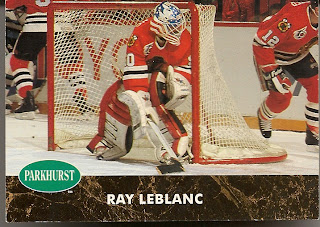 In the trading card boom of the early 90's, it was common for a player who only played a handful of games to get a card.  For Ray Leblanc he got into exactly one NHL game and managed to win it, allowing only one goal on 22 shots. For a long time I thought this was a great accomplishment but then I read the back of the card and realized is game was played against the terrible expansion San Jose Sharks. Leblanc was returned to the minors and played out his career in the minor leagues.

This is the challenge I propose: what other one game wonders received a trading card despite playing in only one NHL game. The only players I can think of at the moment is former Bruins goaltender Claude Pronovost who received a card in the Parkie Missing Link set and former Leafs goalie Sebastian Centomo who played 40 minutes in one game. I'm sure their are plenty others so if you think of any please let me know!
Posted by Baseballislife1984 at 6:53 AM 3 comments:

I found this sealed gem at an antique mall in the middle of nowhere for $1. I've held off opening it for a while because I want to collect sealed packs but the temptation grew too strong.

Back in the mid 90's POG's were all the rage and it was common for every store at the mall to be sold out. Many recess fights later, POG's were banned from my public school. Although I never recall personally bringing them to school out of fear of having them stolen from greedy little thieves.

The Pack I purchased had a price sticker on it, which was removed by a careless old man and that explains the big white mark in the bottom left corner of the pack. Each pack contains 5 pogs and a checklist. I managed to pull Nik Lidstrom, Trent Klatt, San Jose Sharks team logo, Steve Smith and Nik the stick. If anyone recalls Borschevsky from his first few seasons with the Leafs, he was a near point a game player before sliding into obscurity with a handful of other teams. Steve Smith is known for accidentally scoring on his own net in the playoffs and costing the Oilers a Stanley Cup.

I'm considering going after the set as I think it would be a nice item to have in my collection.
Posted by Baseballislife1984 at 6:44 AM 1 comment: 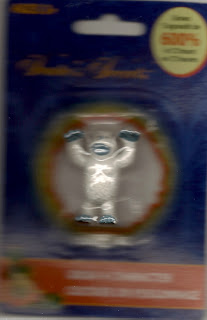 Sorry for the fuzzy scan, it was tough to get a good quality one! I received this Bumble as a Christmas stocking stuffer from my girlfriend. I'm not sure if you can see it, but in the top right corner it claims to grow 600% in 72 hours when you soak it in water. I'm a little scared of it to be honest and if it grows as big as I think it will I might have to call in some help from Yukon Cornelius to tame it!! I'll post in a few days when it's fully grown.
Posted by Baseballislife1984 at 6:33 AM No comments: 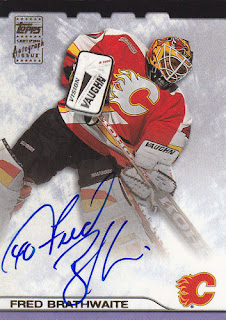 During the 80's and 90's Canada had a men's National Team that would compete in all major international competition's. Being named to one of these full season squads meant that no one in Pro Hockey wanted you OR you were saving your eligibility for the Olympics. After 5 straight seasons of bouncing between the NHL and AHL, Brathwaite was no longer wanted and signed with the Canadian National Team.

Due to injuries in the net for the NHL's Calgary Flames, Brathwaite was signed to second chance contract and got a shutout in his first start with his new team. I became a Brathwaite fan after that game. Despite finding modest success in the NHL, Brathwaite always gave 100% effort. He still plays pro hockey in Germany and recently played against San Jose in an exhibition game.

I consider this card to be the cornerstone of my Brathwaite collection, which I hope to keep adding to.
Posted by Baseballislife1984 at 9:27 PM No comments:

This past summer I started up a blog to focus on the Blue Jays season but I quickly grew bored of it and deleted it. I've spent a lot of time deciding on a blog that I can maintain interest in and I've decided to go with a more general one focusing on my collecting.

While my first love for collecting has always been hockey cards, along the way I've picked up interest's in other area's. I recently starting reading comics again after giving them up in 2003 and I've started to collect the comics I grew up reading as a kid: Ducktales, Uncle Scrooge, Darkwing Duck  and Chip N Dale Rescue Rangers to name a few. I have BOOM comics to thank for the return of my childhood heroes!

The second collection I've picked up again is my vintage gaming collection. It's remained dormant since the early 2000's. This past summer I was able to pick up roughly 75 titles covering different systems such as NES, SEGA and Gameboy.

Over my collecting life I find that the interest in area usually means losing interest in another.  The one collection I've lost interest in is baseball cards.  I really haven't liked the recent releases and I'm not overly impressed with the Jays roster. I hope that one day I'll return to this collection and complete some of my un-finished 80's and 90's sets.

While hockey cards, comics and vintage games is a lot to focus on, I do have other collections. I have a small toy collection, mostly of Star Wars and hockey figures. I also collect books as I hope to have a nice library one day. I enjoy sports books but I also like anything on Canadian History and books written by Clive Cussler. These are just a few of my smaller collections and I hope to get into some other collections in future posts.

My blog will have certain feature articles on a regular basis such as: vintage game reviews, where are they now? Ffeaturing forgotten actors and athletes of days gone by. Hockey card pick ups, autograph successes and challenges. I look forward to posting and I hope the few people who read my blog will enjoy the pieces I share.
Posted by Baseballislife1984 at 9:03 PM No comments: