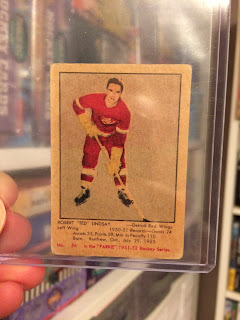 The first hockey card set of the modern era is considered to be 1951-52 Parkhurst. The set features cards that are below current standard size. The card backs are blank and the stats are placed on the front of the card.

Growing up collecting in the 80s and 90s before the internet, the 1951 cards were VERY tough to come by. They were almost like a myth to me, rarely did I ever see them in person through local shows, antique malls and flea markets. On the occasion I would see a very over priced common in low grade.

A few years ago, I decided to chase after the "Winning Goal' card featuring Bill Barilko. At shows I never saw the card priced out below $100 and those lower end cards had peeling on the back from being placed in an album. Over the years of hunting for one, I started to realize how affordable the 1951 set can be with the exception of a few players.

Through some research I discovered that the 1951 set was sorted through a cement mixer and packaged by hand. This is why some of the cards are very tough to find in High Grade. Not the biggest challenge for me as I am happy with the cards in lower grade. 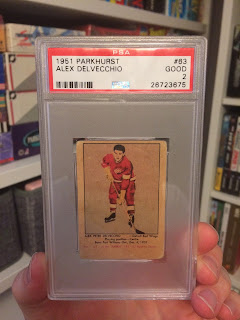 Currently I am at almost 30 cards for the set, which features 105 different players. My goal is to be 50 percent done the set by the end of 2017! Ten of the cards I have are graded by PSA and these cards look really great in the holders.

Certainly the last card I will need for the set will be the Gordie Howe rookie which is now going for $1,000+ even in low grade. Looks like I will have a lot of selling to do to save up for a card like that!
Posted by Baseballislife1984 at 8:01 AM No comments: