As mentioned in my previous post, I have been very busy with work this summer and I have had little time to log or post pickups.

I have managed to pickup some nice cards this summer for very low prices. I have mainly been focusing on between the pipes cards and going for journeymen goalies.

Not many people appreciate the journeymen, although I always have. Almost all hockey players as youngsters dream of playing in the NHL and very few people ever make it there. Some of the few that make it, make it for a very brief period of time and spend a LONG time trying to make it back to get one more chance. 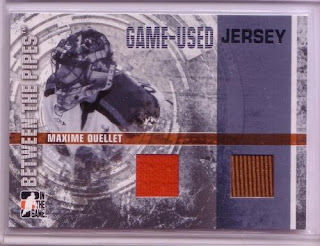 Maxime Ouellet was a highly touted prospect in junior and his career in pro never really amounted to much. Ouellet was excellent on weak Canadian World Junior teams and I really liked his style. This led me to writing Ouellet and asking for an autograph, which I recieved: my very first through the mail autograph.

What I really like about this card is that the two jersey pieces feature jerseys from his time with the Washington Captials and Portland Pirates.

Ouellet was outstanding for a weak Pirates team in the 2003-04 season, which featured a team with only two players posting more then 40 points! In 52 games Ouellet posted a 1.99 GAA, ten shutouts, .930 save percentage despite having a weak record of 15 wins, 29 loses and 8 ties.

Ouellet had one more decent season in the AHL before struggling and bouncing around various pro leagues finally retiring in the 2008-09 season.

This is the first of my many summer pickups that I hope to keep posting over the next few weeks.
Posted by Baseballislife1984 at 7:22 PM No comments: 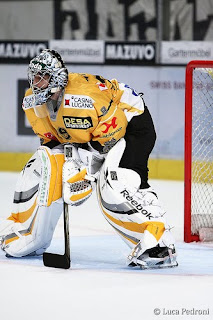 My blog lately has been focusing on more news then collecting. This is thanks to being swamped with work this summer and I have been unable to take the time to pick my far and few pickups.

I stumbled upon a story recently that David Aebischer had been invited to Jets training camp. I always thought Aebischer had a bright future in the NHL after his 03-04 season with the Avalanche when he became the number one goalie after Patrick Roy retired.

Aebischer had one good season in the NHL and then bounced around before heading to the Swiss League where he has played the last four seasons. His play, or should I say statistics have declined since he returned to the Swiss league and he is coming off his worst season posting a GAA above three and a save percentage below .900.

For a goalie of his caliber, Aebischer has really done nothing in the Swiss league to deserve another NHL shot. He has put up ordinary numbers and tanked in the playoffs. Luckily, thanks to the salary cap teams are doing interesting things with there goaltending and try to get by with less in net.

If Aebischer makes the Jets out of training camp, the Jets would have to make some sort of deal with his Swiss team as he is still under contract to them.

Aebischer once had a bright NHL future in net and he saw that future slip away pretty fast. While he has done very little to deserve a second chance, he is getting one and I really hope he makes the most of it.
Posted by Baseballislife1984 at 6:55 PM No comments: 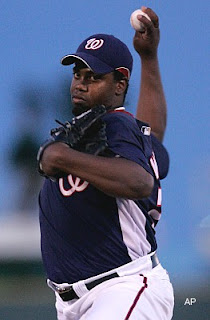 I was going through the baseball box scores the other day when I saw a gem of a game pitched by the Angels Jerome Williams. I thought the name was familiar and upon checking the Internet I realised it was none other then former first round pick Jerome Williams who last pitched in the major leagues in 2007.

Upon checking out Williams baseball cube profile, I couldn't believe he had still been active all these years since his last major league appearance. He really started getting lit up in his later years, struggling with weight and injuries that after 2009 I figured he was done with ball.

Turns out Williams hadn't given up after all and was in Taiwan for the 2010 season. He has spent most of the 2011 season with the Angels Triple A affiliate Salt Lake until his call up.

It's nice to see that guys can go over seas and resurrect there careers, think of guys like Colby Lewis and Ryan Vogelsong. What use to be career suicide (going over seas) has been a spring board in giving players a second chance at the Major Leagues.

It will be nice to see Jerome Williams find success and finally live up to his potential but it's mainly nice to see a guy work hard and get back to the majors after a long time away.

Whatever Happened To Brian Finley 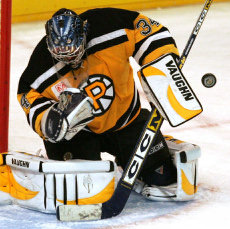 In 2007, the first round, 6th overall pick of the '99 draft fell off the face of the hockey map with very little trails leading to what had happened. For a few years I have tried to figure it out for myself  and I even wrote him a letter asking him myself, to which I received no response, although he did sign my card.

A few days ago I found this great article and the mystery was finally solved, although the story was a much more sad one then I had imagined.

Brian Finley seemed to have it all, he was a big goalie 6"4 and 200lbs who posted great numbers in his junior career, which led him to being chosen 6th overall in the '99 entry draft by the Nashville Predators.

He missed his first year of pro hockey due to a groin injury suffered near the end of his last junior season. After the year off he wasted no time re-establishing himself, winning a Calder cup in the 2004 season after posting the best season of his young career.

He dominated the minors and every once in a while the Predators would call him up to see if he was ready. Finley allowed 10 goals in all during one start and a relief appearance in 107 minutes. Not great numbers for a top prospect.

Seven years after drafting him and not developing like they hoped, the Predators let Finley go and he was picked up by the Bruins. He snuck into two more NHL games with the Bruins playing much better this time in the NHL. Finley ended his NHL career having played only 166 minutes in the best league on earth.

After that, Brian Finley's stats stop and wikipedia states that Finley was not offered a contract by an NHL team after the season and decided to retire. I knew that there was more to the story then this, which leads to the article I found:

"The heartache is still there. It tugs away at him every now and then, especially when he turns the TV on and sees an NHL game being played. It comes out when he talks about the past, about what was, what could have been and what should have been".

The first few sentences make me feel a deep sadness. We have all felt the pain of having a dream in life, chasing it and for whatever reason: our own fault or some outside force, we fall short of that dream.

During the 2006-07 season Finley tore his left groin and labrum, this was the second major surgery on the groin (he tore the right one in junior) and it ended his career for good.

"It still bothers me to this day and that's why I don't watch a lot of hockey. You can't put all the blame on the injuries. There were some seasons when I played very well in the AHL, but I didn't play well when I got called up to the NHL and that's when you have to perform."

The article puts in a lot of quotes from Finley and he seems to have a lot of regret and disappointment in terms of what was expected of him and how his career went:

"While at ease with where he's at in his life today, Finley does admit to feeling like one of those NHL flop stories, something he tries to cope with by not reflecting too much on the past. Still, it is hard".

"It's disheartening," he said. "It's tough seeing a lot of guys who were your equal before or who you were better than, and they're playing and playing well. I choose not to dwell on it. I don't watch a lot of hockey because that's difficult to do, especially knowing you had the potential.

While most of the article talks what might have been, there is a happy ending. Finley now lives in Toronto and is a police officer.

"I really like it," Finley said. "It's pretty rewarding. I come from a team background, so it's great being involved in a team again. Every day is different and you're out there meeting all kinds of people."

The whole story makes me think of Moonlight Graham in Field of Dreams reflecting on only getting to play five minutes in the majors (he played right field for one inning and did not bat) and how he went on to become a doctor. Kevin Costner then points out that if he had only been a doctor for five minutes then that would have been a shame.

While Finley had plenty of potential, his career did not go the way anyone had hoped. Instead of protecting a hockey net, he his now protecting people and there is no shame in that. 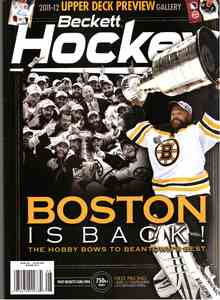 I'm up late after a poor showing at my Friday night pick-up game. It's my own fault for loading up on Chinese food a few hours before I went to play. I'm currently only getting one day off work a week right now and wasted my one free night to stay up late playing hockey like crap!

Anyway, I picked up a beckett today for the first time since Steve Stamkos rookie season. When Beckett started to do the bi-monthy issues and jacked the price up to un-reasonable amount, I quit buying on a regular basis.

I  have found it tough lately to figure out a cards value with my older guides so I figured it was time to get something current. I personally believe ebay is much more accurate with it's closed sales information. My main motivation was to go through the price guides with beckett and figure out which sets I'm currently working on are the most reasonable to continue building. The information on print runs and checklists comes in pretty handy when your trying to figure out cards you are missing for a set.

For almost two years I have mainly collected 90's inserts. I never really needed set information or prices because most of the cards I picked up were only a few dollars each and I have my good old Charlton price guide from 1998 with full checklists inside. I have recently decided to go have nice game used pieces and autographs. I really want to buy a nice wooden frame display case for my man cave and I want some nice cards to display in the case. 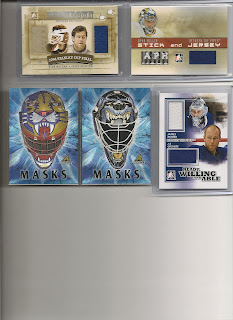