Blaine Lacher: Not Just a Flash in the Pan 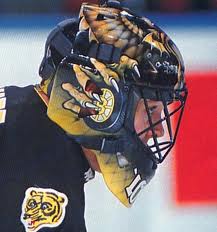 Summer is over and it's time to get back focusing on hockey! Lately I have been thinking a lot about the short and brief career of Blaine Lacher.

He burst on the scene in the lock out shortened season of 1994-95 as a relative unknown after a strong college career. In his only full season in the NHL (actually his only full pro season in any league) he posted a 19-11-2 record with 4 shutouts and a 2.41 goals against average. Lacher was never the same again after his rookie season and drifted into obscurity after retiring part way through the 1996-97 season.

His story is living proof how quickly success can come and how quickly it can go away. To many his career was a flash in the pan, however I don't view it that way. He spent four years at a great school, played in the NHL, which is what almost every hockey player dreams of and he found success, even if it was only for a short period of time.

Upon searching for Lacher's where abouts, I was mainly looking to see if he still continued to play hockey after leaving the pro ranks for good. From what I found, it seems he was active in senior men's leagues until about 2004. After that the trail went cold and it seems his competitive days in hockey were over . He would have been 34 years old when he left hockey for good.