It has been almost 5 years since I last posted on here! I am alive and well, still active in the hobby without taking a break at any point since I last posted. During my inactive streak I have grown my career, married and became a Father. Over the years I have casually checked in to follow some of you and always hoped I would make a return to blogging. 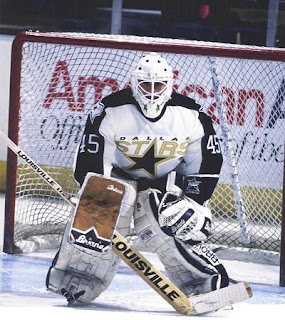 Today I randomly started thinking about Allan Bester, mainly his return to the NHL in the 1995-96 season with the Dallas Stars as an injury replacement for Andy Moog and Darcy Wakaluk. I was hoping he got a card during that season, however it was just with the Edge Ice Minor League set, which I might add is a beautiful set and very hard to track down sealed boxes of. During his ten game stint with the Stars he went 4-5-1 with a 3.00 GAA and .899 save percentage, which doesn't sound great, however Moog did not fair much better on a team that only won 25 games.

Bester burst onto the scene during the 1983-84 Season as an injury replacement for Mike Palmateer and after several games was returned to Junior. He was later recalled and ended up playing 32 games and leading the team with wins. He also averaged 38 shots against a game as a teenager.

From 1986-1990 he became a full-time NHL player, however he split starts with other goalies, primarily Ken Wregget. He never quite established himself and began an odyssey through the Minor Leagues from the 90-91 season to when he retired in 97-98. 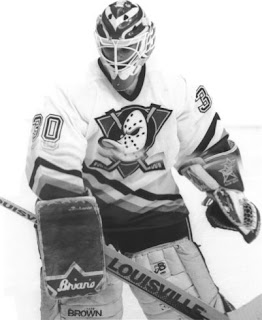 While doing research for my post, I actually came across this picture of Bester in a Ducks uniform and found information stating he had signed with Ducks as a free agent but was buried in the Minor Leagues, never making it into an NHL game with them.

Today Bester is working a Sales position  in the Hospitality Industry in the Orlando area, which is where he played his last Pro Hockey game. Bester showed a lot of promise as a young goalie but never seemed to play on strong teams and was at a disadvantage due to being relatively short for a goalie at 5"7. He certainly gave a lot of young Leafs fans in the 80's something to cheer about with his work ethic and acrobatic style of goaltending.